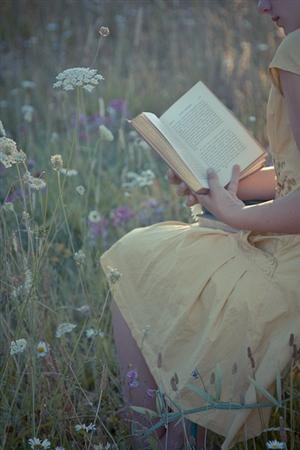 I've moved! And I hope you like my new home:) For the last couple of years I've known I've needed an actual website with WordPress and at long last, it's here! I've moved to a softer, more vintage look though some of you might miss these misty woods! It's kind of bittersweet saying goodbye to Blogger and the memories made here...

Heartfelt thanks to HDCreative in Seattle for giving me a new place to land.

Just click on Laura Frantz and we'll pick up where we left off...

Posted by Laura Frantz at 7:50 AM
Email ThisBlogThis!Share to TwitterShare to FacebookShare to Pinterest 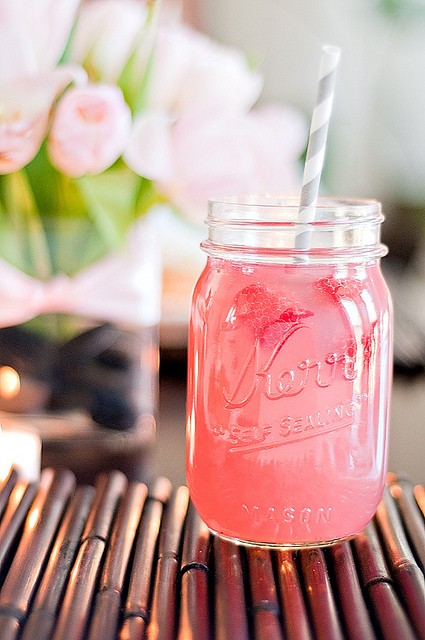 I just wanted to say I have a surprise coming that I hope delights your heart like it does mine:) For now, till it appears, I'll be quietly working on that next novel and sipping out of my Mason jar. Summer is nearly here!

Back soon...
Posted by Laura Frantz at 8:49 AM
Email ThisBlogThis!Share to TwitterShare to FacebookShare to Pinterest

Posted by Laura Frantz at 6:41 PM
Email ThisBlogThis!Share to TwitterShare to FacebookShare to Pinterest 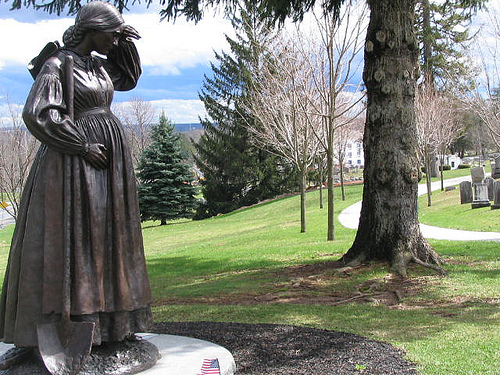 In honor of Memorial Day, I thought I'd share something from my research concerning the Civil War and Gettysburg that I find very moving.

Elizabeth Thorn was the wife of the caretaker of Evergreen Cemetery in Gettysburg. He was also a soldier in the U.S. Army. The mother of three, Elizabeth was six months pregnant with her fourth child, when the battle of Gettysburg ended. In the three weeks following, she buried a hundred or more fallen soldiers in the July heat, sometimes assisted by her aged parents. Three months later her baby, Rose, was born. Her husband, Peter, eventually came home.

For death is no more than a turning of us over from time to eternity.

~William Penn
Posted by Laura Frantz at 5:13 PM
Email ThisBlogThis!Share to TwitterShare to FacebookShare to Pinterest 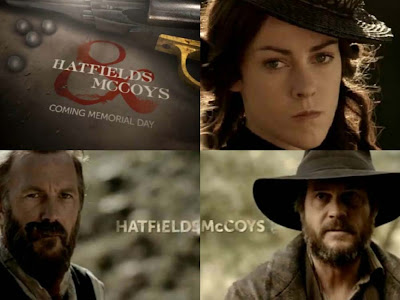 Happy almost end of May!

I can't believe June is right around the corner. Lately with travel and a bunch of school and fiddle activities, I've been AWOL;)

But I'd be remiss as a Kentuckian and history lover if I didn't tell you about the History Channel's upcoming showing of the Hatfields and McCoys. The video trailer is absolutely mesmerizing but since it's quite dark given the subject matter, I'll just highlight a few pictures. 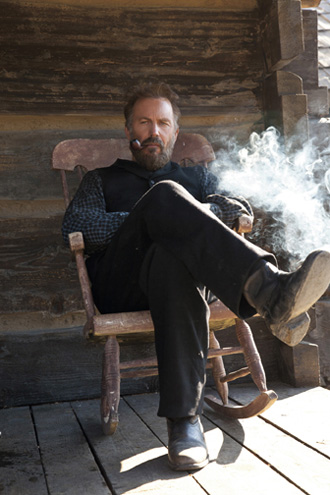 Since I grew up in Hatfield-McCoy territory, I've long been a student of their history and this is a must-see for me. The large cast includes Kevin Costner and Bill Paxton as clan leaders, Devil Anse Hatfield and Randall McCoy.

I've always been fascinated by the tragic Johnse-Roseanna love affair at the heart of the feud and the depths to which these families descended when driven by hatred and revenge. Sadly, the feud-mentality still exists in some parts of Appalachia. I'll be interested in seeing how true to life this miniseries is and what liberties are taken. I've already detected a difference in Roseanna. She was dark-headed, not a blonde!

On a lighter note, Devil Anse became a Christian in his later years and was baptized by a preacher who proudly boasted he'd "dunked the devil himself." He lived the remainder of his life at peace though no doubt haunted by his past.

Take a peek at the archaic but novel-worthy clan names - Ellison, Tolbert, Perry, Phamer, Selkirk, Wall, Parris, and poor Cotton Top. The women include Alifair and Levicy to name a few... 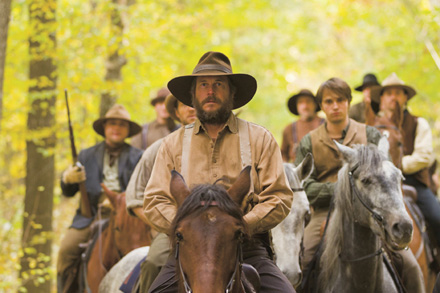 Over the long weekend, the Frantz clan is planning a BBQ on our deck, rain or shine (probably rain:) We often grill beneath an umbrella!

I'd love to know what you're doing for the long weekend:) Or if you've heard about this tragic part of Kentucky's past...?


Have a blessed end of May!
Posted by Laura Frantz at 7:48 PM 71 comments:
Email ThisBlogThis!Share to TwitterShare to FacebookShare to Pinterest 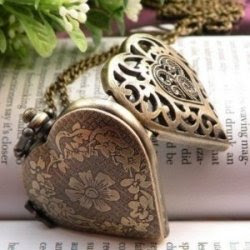 A precious secret of Christian life is to have Jesus dwelling within the heart and conquering things we could never overcome. It is the only secret of power in our lives. Men cannot understand it nor will the world believe it is true that God will come to dwell within us and be the power, the purity, the victory and the joy of our lives.

I can do all things through Christ which strengtheneth me.
~Philippians 4:13

Days of Heaven on Earth
A.B. Simpson
Posted by Laura Frantz at 7:05 AM
Email ThisBlogThis!Share to TwitterShare to FacebookShare to Pinterest

see you in Seattle...or Portland! 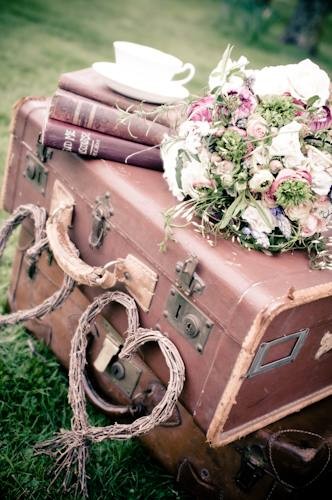 I'll be signing books in the Seattle and Portland area this week and would love to see you!

If you can email me at lauran@tfon.com, we'll mail the book to you:)
Congrats and happy reading, my friend!

Heartfelt thanks to Lorna for being such a wonderful guest!

See you next week...
Posted by Laura Frantz at 7:17 AM
Email ThisBlogThis!Share to TwitterShare to FacebookShare to Pinterest

the ride of YOUR life;) 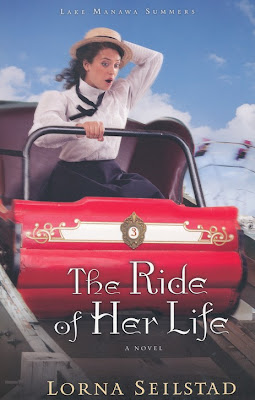 Our final Friday giveaway features last but not least, Lorna Seilstad. She's a fellow author and friend at Revell who is giving away a signed, hot off the press copy of her new release, The Ride of Her Life here...which may just prove the ride of yours!

The first time I saw this cover I smiled:) The colors are wonderful and if you look closely, the roller coaster actually appears to be in motion as there's a delightful bit of blur...

Here's a bit about the book...

The only man pragmatic Lilly Hart needs in her life is a six year old. Widowed two years, Lilly leaves the shelter of her intrusive in-law's home to stand on her own and provide for her young son by working for the summer as a cook at Lake Manawa.


However, her in-laws find that life utterly unsuitable for their grandson, and when a row ensues, a handsome stranger - who designs roller coasters, of all things - intercedes on her behalf. Still, Lilly is not about to get involved with any man, especially this cocky (though charismatic) gentleman.  Little does she know she is about to begin the ride of her life... 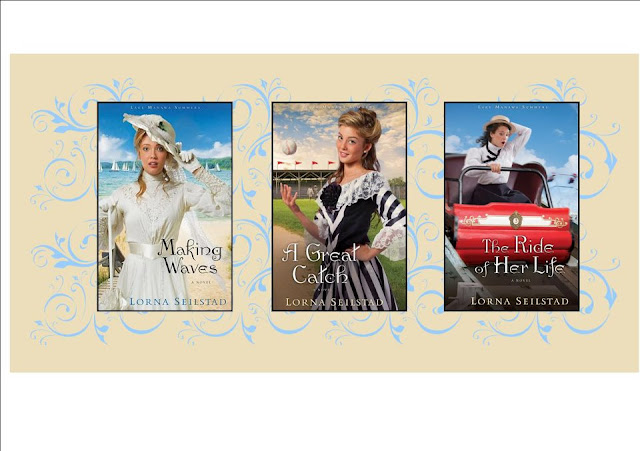 It's been such a blessing to know Lorna as we're both new Revell authors. Somehow she manages to juggle many hats besides author - wedding planner, mom and wife, and church ministry to name a few. With her new book releasing this month, she's been busy with radio interviews, book signings, and more - and she's here to answer any questions about the writing life or her books! 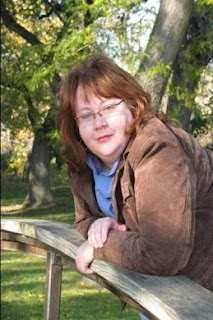 Please leave a comment or question for Lorna if you'd like to be included in the drawing.
Winner announced this Monday, May 14.

Join Lorna at her website ~ http://www.lornaseilstad.com and also her group blog at http://www.inkspirationalmessages.com where a great group of book-loving writers post a wonderful array of topics!

Posted by Laura Frantz at 7:11 AM 59 comments:
Email ThisBlogThis!Share to TwitterShare to FacebookShare to Pinterest

I'm counting kisses in book 2 of The Ballantyne Legacy;) I'll never forget the reader who said she never gives a book a high rating if there are less than 3 kisses in it! While I chuckled at the time, I've given it serious thought since. Sometimes kisses count...

I've always considered myself a historical fiction author, not a historical romance author. There is a difference. Romances almost always have the hero arrive early and then he and the heroine dance around till the end of the book. In plain ol' historical fiction, the "rules" are a bit more lax. Heroes can pretty much come in whenever they please and the book doesn't follow the traditional romance pattern. The emphasis is usually more on history. There are always exceptions of course. But woe to the romance writer who violates the rules - or the reader who picks up a book thinking it's a romance and gets more history instead!

This is the sweetest scene. Love the hesitancy between them - so true to life. Love that he's tender with her - and that she is somewhat sad when the kiss ends. Catch her longing look? His sudden confusion? Their silhouettes...the light behind them. Hear that violin? This is no peck on the cheek! Yet it's genuine and respectful and more. Hmmm... There's something about film that captures what few books can. This scene works on so many levels. At least for me...

I love writing such stuff:)

Are you more a historical romance reader or a historical fiction reader? Ever count kisses?
Posted by Laura Frantz at 12:30 AM 64 comments:
Email ThisBlogThis!Share to TwitterShare to FacebookShare to Pinterest How these words help us! Think of them when people rasp you, when the devil pricks you with his fiery darts, when your sensitive, self-willed spirit chafes or frets. Let a gentle voice be heard above the strife, whispering, "Keep sweet! Keep sweet!" And, if you will but heed it quickly, you will be saved from a thousand falls and kept in perfect peace.

True, we cannot keep ourselves sweet, but God will keep us if He sees that it is our fixed, determined purpose to be kept sweet, and to refuse to fret or bear a grudge, and sympathize with our hurt feelings and nurse our little grievance.

God will give us all the love we really want and honestly choose. We can have our grievance or we can have the peace that passeth all understanding, but we cannot have both.

There is a balm for a thousand heartaches, and a heaven of peace and power in these two little words - keep sweet.

Posted by Laura Frantz at 7:14 AM
Email ThisBlogThis!Share to TwitterShare to FacebookShare to Pinterest
Older Posts Home
Subscribe to: Posts (Atom) 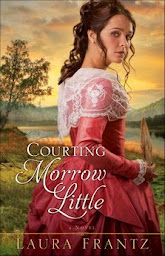 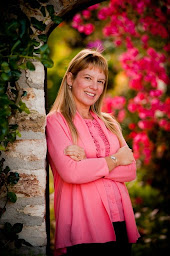 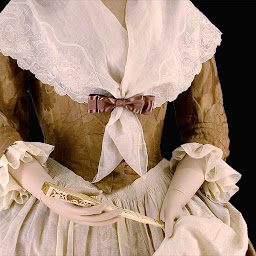